The Study and Project 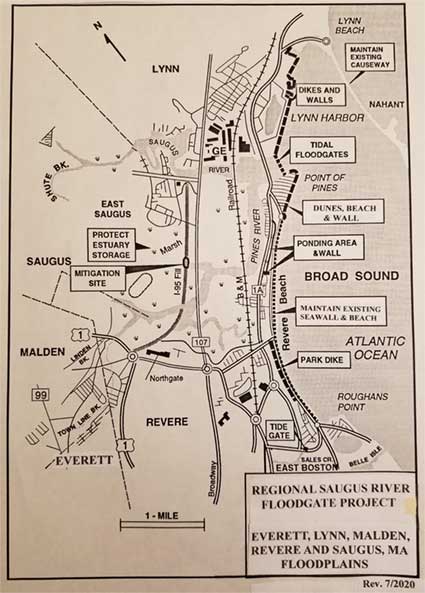 The Regional Saugus River Floodgate Project is the primary option to regional protection which is being re-evaluated and updated in the Boston North Shore Study.  The project is a coastal flood protection project to provide a very high level of protection to the Cities of Revere, Lynn, Malden and Everett, and the town of Saugus, Massachusetts. The region, five (5) miles north of Boston, is the most vulnerable area along the Massachusetts coast to storm surge flooding and sea level rise.

The US Army Corps of Engineers New England Division investigated solutions to the problem with 5 Steering Committees over 4 years ($2.6 million).   The Recommended Regional Project includes a Floodgate structure at the mouth of the Saugus River with nine (9) gated openings 500 feet wide, designed to provide safe passage for navigation and the natural tide levels and flushing in the 1,650 acre tidal Estuary landward of the gates. The Estuary would be purchased and managed to protect its flood water storage and environmental resources.  The gates would be tied to 3.1 miles of shorefront improvements along Lynn Harbor, Point of Pines and the Revere Beach Reservation.  It would protect 5,000 buildings, 8,000 housing units, 10,000 residents, 20,000 employees and 400,000 commuters in the region against the worst coastal storm likely to occur and against sea level rise, estimated damages at $ 1.3 billion.

A 2.5 year final design effort ($6 million, 75%) completed by 1993 most investigations and the physical and numerical modeling of the Floodgates, estuary, breaching I-95, and shorefront improvements.  The project would cost an estimated $230 million (2020 p.l.) and be cost shared with the Federal Government.   A narrow opening in an abandoned I-95 embankment restricts tidal flows to 500 acres in the upper Estuary deteriorating the wetlands.  The modeling showed the strong advantage of restoring sand dunes to protect Point of Pines using the I-95 sand and reducing overtopping along Revere Beach.  The use of this sand could remove 4,900 feet of the embankment restoring 16.7 acres of ecosystem habitat and restore flushing to the upper estuary.  Breaching and removing the I-95 embankment to restore the wetlands is a major goal of resource agencies.

The Secretary of Environmental Affairs after the NEPA/MEPA review provided a positive Certificate, the Commonwealth then supported it, and the US Congress authorized the Project for construction.  Then in the fall of 1993 a new out of state Secretary of Environmental Affairs was opposed to construction along the Massachusetts coast and the project was stopped, and since it has been de-authorized.   Renewed interest in the Project by the communities due to coastal flooding and accelerated sea level rise has resulted in the Boston North Shore Feasibility Study which was authorized by the President on 23 Dec 2022 to investigate the flooding and ecosystem needs of the region.

Revere officials and others requested Senator Edward Markey to sponsor legislation for a regional investigation for coastal flood protection and environmental enhancement, which he and Representative Katherine Clark did in the Water Resources Development Act of 2022, which President Biden signed with the National Defense Authorization Act on 23 Dec 2022.  Funding is now needed for the Boston North Shore Study from both the Federal and state governments in order to sign a cost sharing agreement for the study.  This  "New Study Start" process was initiated by a joint letter request by the five communities.  The Feasibility study process would develop, evaluate and update alternatives and impacts.  Public involvement is required in order to evaluate alternatives and environmental concerns and to renew support from the Commonwealth and communities.  This support, an approved Feasibility Report and EIS/EIR are required before the design process can begin.  The city of Revere has taken the lead for the region.   Since no funding is in the Corps budget for this fiscal year, and it's uncertain when funds will be made available, it has been recommended that Revere officials consider obtaining state and local funds, and then, in coordination with the Corps and with their oversight, proceed with the study.   This recommendation was made in light of the danger which the region is facing with accelerated sea level rise and frequent flooding, and since it will likely take until 2030 before a Regional project can be completed.

12-23-22 -- A detailed 20 page draft scope of work and schedule for accomplishing the feasibility study was prepared by the former Corps project manager of the project and sent to Revere for coordination and to the Corps for review.  The objective is to expedite the study as soon as funding is received by making making maximum use of existing reports, and after public/agency coordination and hopefully renewing state support, and then move quickly into final design.

12-23-22 -- On this date President Joe Biden signed H.R. 7776, the National Defense Authorization Act 2023 which includes the Water Resources Development Act of 2022 (WRDA 2022), Sec. 8202, “Expedited Completion”, which states: “The Secretary shall expedite the completion of a feasibility study for each of the following projects, and if the Secretary determines that the project is justified in a completed report, may proceed directly to preconstruction planning, engineering, and design of the project:  …  Project for flood and coastal storm risk management and ecosystem restoration, Boston North Shore, Revere, Saugus, Lynn, Malden, and Everett, Massachusetts…”

11-29-22--A zoom meeting was held with Revere's Planners Elle Baker and Frank Stringi, Ofsthun Conor, Coastal Scientist with the Woods Hole Group, the Corps of Engineers' John Kennelly, Chief of Planning and Chris Hatfield, Chief of Plan Formulation Branch, and Bob Hunt, former Corps Project Manger.  The purpose of the meeting was to discuss Connor's flood risk study, and the pending authorization for the Corps' Boston North Shore Study requested by the five communities.  Since John is retiring in a few weeks, Chris will be the point of contact with the Corps.  If the Corps study is authorized this year, the next step will be for the communities to obtain funding to match the Federal funds once they are appropriated.  Several participants requested participation in the meetings with Revere's Working Group which represent the five communities.  Also requested was information on other Revere's flood studies.  John mentioned that this web site had been very well done, especially useful was the availability of the documents.

11-16-22--SEA LEVEL RISE PROJECTIONS:  The NASA Sea Level Change Team recently confirmed near term catastrophic and nuisance flooding, evidence indicates the rise is accelerating, and findings confirm the higher rates developed by Federal agencies in a Feb 2022 report by NASA, NOAA, and the US Geological Survey that over the next 30 years, by 2050, sea levels on the East Coast will rise 10 to 14 inches, a rise historically seen over 100 years. This rise closely aligns with the Corps of Engineers High curve projection which the project will be evaluated to protect against, and likely evaluated for even one foot higher forecasted to be reached in 2070.  As previously designed the project would be designed to be easily modified for about a five foot rise, possibly to be achieved in 2100.  Of even more concern, "..by the mid-2030s, every U.S. coast will experience more intense high-tide floods due to a wobble in the Moon's orbit that occurs every 18.6 years."

9-7-22 -- Revere Journal reported:   "The City of Revere received state Municipal Vulnerability Preparedness (MVP) funding as part of a regional effort to help people and places prepare for extreme weather.  The Cities of Revere, Malden, and Everett, all longtime members of the RMC (Resilient Mystic Collaborative), are working with their coastal neighbors to the north, Saugus and Lynn.  The cities secured $151,000 to begin work on a regional Saugus River Watershed Vulnerability and Adaptation Study to help these coastal communities manage coastal flood damage."

July 2021 -- Senators Markey and Warren submitted a $1.5 million funding request to the Senate Appropriations Committee for the intended recipients of Revere, Saugus, Lynn, Malden and Everett to support the Regional Saugus River Flood Protection Project and study in partnership with the Corps of Engineers.  If funded, "The project aims to analyze current and future flood risk region and recommend a hybrid solution..to advance regional strategies for climate adaptation and flood mitigation measures.  The Saugus and Pines River area has sustained repetitive flood damage for decades and the recent MA-Flood Risk Model predicts that the already vulnerable conditions are exacerbated by climate change and sea-level rise impacting Environmental Justice populations and Area of Critical Environmental Concern."

5-24-21 -- Elle Baker, Revere Environmental Planner, advised that she "..was able to secure funding to establish a new regional working group of stakeholders for the project and I hope to have this kick off in June.. likely vis zoom."

3-30-21--The city of Revere and Corps of Engineers believe an existing study authority can be used to start the Feasibility study sooner than waiting the anticipated 3 or 4 years for authorization and funding.  The attached letter from Revere's Mayor, on behalf of the five communities, requests the Feasibility study for a regional flood protection project be investigated as part of the Corps' North Atlantic Coastal Comprehensive Study.  If approved the cost of the Feasibility study would be shared 50-50 between Federal and non-Federal interests.  Revere Support Letter

3-23-21--The city of Revere arranged a zoom meeting with Mr. Greg Robbins, Director, Division of Waterways, Dept of Conservation and Recreation (DCR).  Attending the meeting were:  Mr. Robbins; Ms. Elle Baker with Revere’s Planning Office;  Ms. Mary Lester with the Saugus River Watershed Council & Lynn Conservation Comm.; Revere’s consultants; and Bob Hunt, Senior Project Manager ACOE Retired.  The purpose of the meeting was to obtain guidance from Mr. Robbins on the city’s plans for development in the Riverside and Point of Pines area, as well as his concerns for the Regional Floodgate Project. The attached document “Environmental Benefits and Mitigation”, prepared by Mr. Hunt at Revere’s request, was sent to participants by Ms. Baker, and lists the 16 major environmental benefits and mitigation measures of the Regional Project.   Mr. Robbins was very interested in the information, admitting he wasn’t that knowledgeable on the project.  He was aware that, at several public meetings, folks were quite supportive of the Regional Project as a panacea for their flooding problems.  He cautioned us that regulations have changed over the past 30 years and there is concern whether the Regional Floodgate Project could have a significant detrimental impact on the Rumney Marsh ACEC estuary, and whether it would ultimately be acceptable because of new regulations and its cost.  He agreed that DCR would have a major part in this project.  Ms. Baker advised that she was: concerned that without the Regional Project, we might as well pack up and move out of the floodplain; hoping funds would arrive next month to fund a consultant who’d organize/manage an Advocacy Group to coordinate a regional flooding solution; and also, she’s coordinating with the ACOE to expedite study funds.  The city is also coordinating letters to the Governor and Secretary of Energy and Environmental Affairs.  Mr. Hunt explained the background on the project, advised coordination was needed with state agencies, and that all of the Planning Reports and Design Documents on the physical and numerical modeling of the floodgates, estuary, breaching I-95 embankment, Revere Beach and dunes at Point of Pines had links on the Project’s web site for their use…which they appreciated. View Environmental Benefits & Mitigation

2-9-21  An email entitled "Regional Floodgates: Corps Recommendation for Senator Edward Markey" was sent by the retired Project Manager to the Corps of Engineers with copies to: the Environmental Secretary; Dept. of Conservation and Recreation Commissioner; and officials of the five communities.  The purpose was to alert the Corps to Senator Markey's need for their recommendation on "Re-authorization' of the Regional Project, and reasons why the Corps should consider supporting "Re-authorization".  These  reasons include;  renewed public support, increasing flood threat from sea level rise and benefits, minimal increase in costs, no change in the minimal environmental issues, and that it remains the preferred alternative. Email for Sen. Markey